Reiki can be explained in three ways; as a word, as energy and as a holistic healing system.

As a word- (Pronounced ‘Ray Kee’) is a Japanese word which is most often translated as ‘universal life force energy’.

As an energy- The second part of the word ‘ki’ refers to life force energy, you may have heard other versions of this word from other languages such as ‘Chi’ (as in Tai Chi) or ‘Prana’ from India. This ‘Ki’ is an energy which operates at high vibrations and fast frequencies which makes it difficult to see. Reiki operates at an even higher and faster vibration than the Ki that is present in the physical body so it can move through all parts of the human energy field to break through any energy blocks and promote healing. The source of this high spiritual energy can be described in various ways, depending on what you are happy to accept, the Source, the Universe, God or you can think of it as part of your soul or your Higher Self. For more on Energy Healing...click here 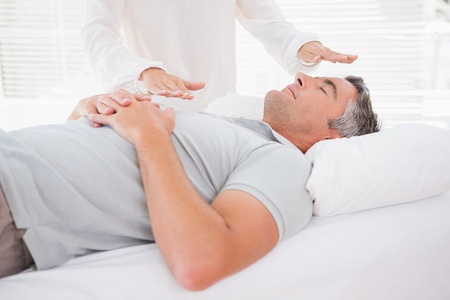 As a holistic healing system - Originally devised by Dr Mikao Usui, born in Kyoto, Japan (1865-1926)  in the early part of the 20th century - Reiki is a healing process that anyone can benefit from and may bring comfort to people suffering from a range of conditions. However it shouldn't be regarded as a cure and neither is it a religion nor a belief system. As a natural form of healing Reiki can support and enhance other forms of treatment including conventional medical treatments as well as alternative/complementary therapies.

Reiki is an amazing healing energy which has an intelligence of its own and will direct itself to areas of greatest need in a client on all levels.Reiki sessions involve the client resting on a treatment couch fully clothed. The practitioner who has been attuned to the reiki energy frequency is then able to channel the energy  through themselves into the recipient by placing their hands on the body or by working in the aura. Reiki is an extremely powerful yet incredibly gentle healing tool. Reiki can also be used on plants, animals, past and present issues.

Used by Initiates of the Ancient Mystery Schools in Ancient Egypt to shift into higher dimensions, this powerful system of Reiki uses seven unique symbols formed through sacred geometry. Practitioners of Annubis Reiki are first required to complete both Usui and Karuna Reiki to Master level.

Devised by American Reiki Master William Lee Rand, Karuna Reiki contains 12 symbols, many of which are used to activate the subtle bodies.  Karuna means ‘compassion in action’, or any action that is taken to diminish the suffering of others, and is the motivating quality of all enlightened beings who are working to end suffering on Earth. A beautiful, deep and transformative hands-on healing experience.

An original method of healing, rediscovered by Mikao Usui in Japan. Reiki translates to “Universal Energy” and works on four levels: physical, mental, emotional and spiritual, and promotes the body’s regenerative self-healing ability.