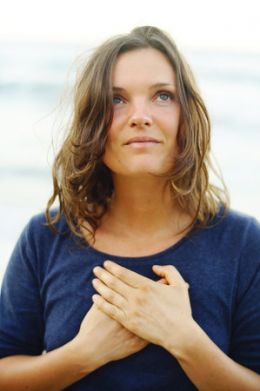 Why is simply paying attention to the good things in your life so powerful? A new brain imaging study investigated this question with fascinating results.

A team of researchers from Indiana University recruited 43 people suffering from anxiety or depression. Half of the group were assigned a simple gratitude exercise - writing letters of thanks to people in their lives - and three months later all 43 underwent brain scans. During these brain scans the subjects participated in a gratitude task in which they were told a benefactor had given them a sum of money and were asked if they'd like to donate a portion of the funds to charity as an expression of their gratitude.

Those who gave away money showed a particular pattern of activity in their brains, but that wasn't the most interesting part of the findings. The participants who'd completed the gratitude task months earlier not only reported feeling more gratefulness two weeks after the task than members of the control group, but also, months later, showed more gratitude-related brain activity in the scanner. The researchers described these 'profound' and 'long-lasting' neural effects as 'particularly noteworthy.' The result is interesting for neuroscientists but it's also potentially useful for the rest of us.

It suggests that the more practice you give your brain at feeling and expressing gratitude, the more it adapts to this mind set. You could even think of your brain as having a sort of gratitude 'muscle' that can be exercised and strengthened. In short, practicing gratitude seems to kick off a healthful, self-perpetuating cycle in your brain.

Counting your blessings now makes it easier to notice and count them later. And the more good you see in your life, the happier and more successful you're likely to be. Shawn Achor, a researcher at Harvard University, says: "Something as simple as writing down three things you're grateful for every day for 21 days in a row significantly increases your level of optimism, and it holds for the next six months. The research is amazing." Other studies show that gratitude increases willpower; helps keep you calm, and can even boost employee morale.

What do you have to be grateful for today?