Blog - Ginger Found to be 10,000 times Stronger Than Chemotherapy 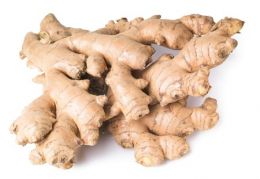 A new study published in PLoS reveals a component within ginger known as 6-shogaol could be up to 10,000 times more effective than conventional chemotherapy in targeting the cancer stem cells at the root of breast cancer malignancy.

Stem cells are at the root of a wide range of cancers, not just breast cancer, and are sometimes referred to as "mother cells" because they are responsible for producing all the different "daughter" cell types that make up the tumour colony. While cancer stem cells only constitute between 0.2 and 1% of the cells within any given tumour, they have the seeming "immortal" ability to self-renew, are capable of continuous differentiation, are resistant to conventional chemotherapeutic agents, and are tumourigenic - they are capable of "splitting off" to create new tumour colonies. The cancer stem cells within a tumour must be destroyed if cancer treatment is to affect a lasting cure.

The new study titled, "6-Shogaol Inhibits Breast Cancer and Stem Cell-Like Spheroids by Modulation of Notch Signalling Pathway and Induction of Autophagic Cell Death," identified powerful anti-cancer stem cell activity in 6-shogaol, a pungent constituent of ginger produced when the root is either dried or cooked. The study also found that the cancer-destroying effects occurred at concentrations that were non-toxic to non-cancerous cells - a crucial difference from conventional cancer treatments that do not exhibit this kind of selective cytoxicity and therefore do great harm to the patient.

It was in evaluating the last mode of 6-shogaol's chemotherapeutic activity and comparing it to the activity of the conventional chemotherapy taxol that the researchers discovered an astounding difference. Whereas taxol exhibited clear cytoxicity in the one-dimensional (flat) monolayer experimental model, it had virtually no effect on the spheroid model, which is a more "real-world" model reflecting the 3-dimensionality of tumours and their stem cell sub populations. Amazingly, this held true even when the concentration of taxol was quadrupled.