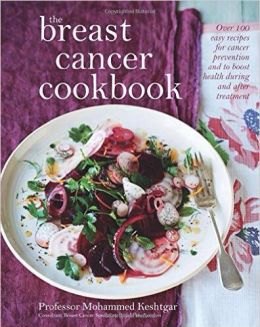 Whilst there are many books about cancer and diet, it is rare to come across one written by a doctor. But a new book, "The Breast Cancer Cookbook" by Professor Keshtgar, a surgeon at London's Royal Free Hospital, changes that. His book contains recipes for cancer prevention and the improvement of survival rates. Many of my breast cancer patients tell me that their consultants are sceptical or dismissive of the benefits of diet, so this book is a breath of fresh air!

He says that as a consultant breast cancer surgeon, he knows first-hand the impact of this illness on women and their families - but it isn't just about luck.

"I have become increasingly convinced that diet and lifestyle play a part in the development of breast cancer. Making changes really can reduce your risk. Numerous studies now show the risk of many different cancers is undoubtedly influenced by diet, particularly whether you eat enough fruit and vegetables.

"This impact is made starkly clear when you consider that in the West, breast cancer is three times more prevalent than in Eastern Asia. But when populations migrate from areas with low breast cancer risk (such as Japan) to areas of high breast cancer risk (the U.S.) their risk of developing the disease soon rises to that of the host nation".

Studies now show as many as nine per cent of cancer cases could be prevented by dietary changes, he says.

"A major study led by my colleagues at the University of Westminster focuses on the effects of diet and lifestyle on the recurrence of breast cancer. They are co-ordinating the largest dietary study to date of UK breast cancer patients, analysing the diets of more than 3,000 sufferers from 56 NHS hospitals.

"Three years into this five-year study, there is strong evidence to suggest that breast cancer recurrence rates can be reduced - and survival rates improved - when patients adopt a healthy lifestyle".

"The effects of diet are long-standing; it doesn't just happen within days and months. But if one changes the actual habit over a long period of time, it's another factor that we can at least use in the prevention of development of cancer".

If you would like to learn more about Breast Cancer and complementary support, then please give us a ring at the Haven Health Clinic and we will introduce you to Matthew Manning, our specialist in Breast Cancer and Healing.