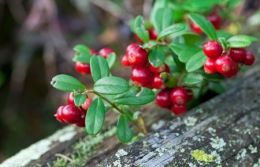 The Equinox has passed and the chill of Autumn can be felt in the air. The leaves are turning and the berries are ripening. Many trees are festooned with bright autumn offerings at this time of year. It is now, as the season changes and the warmth of summer leaves us, that coughs, colds and flu become most prevalent. Some of the berries that are ripe at this time of year have long been used to help ward of coughs and colds and support the immune system as we enter the winter months. Of them, Elder, with its clusters of deep purple almost black berries, and Rose with its plump scarlet hips are two of the most useful. Both are important herbal remedies with a long history of use and still found in the modern herbalist's dispensary.

The Elder (Sambuccus nigra) is a common tree found throughout Britain. There is evidence that Neolithic people ate the berries and the Ancient Egyptians used them medicinally. Its primary use now is in the treatment of upper respiratory infections and for the prevention of coughs and colds. Taken at the onset of flu, extract of Elderberries has been demonstrated to reduce symptoms to three or four days. It has also been shown to be effective in helping inhibit the spread of viruses through the body as it strengthens the cell membrane. The viburnic acid it contains induces perspiration and is especially useful in cases of bronchitis. The berries ripen in August and September. Once picked they can be dried and stored for use in winter infusions or used fresh in teas or made into cordial, syrups or added to jams and jellies. Elderberry Rob is a traditional cough cordial that used to be official and is still widely used in France and Holland. If taken under the guidance of a herbalist elderberries may be prescribed in many different forms, such as tea, tincture or syrup.

The fruits or hips of the Wild Rose or Dog Rose (Rosa canina) are the most commonly used rose species in Herbal Medicine. It is found growing wild in woods and hedgerows and flowers from June to July, and fruits from late August to November. The hips should not be picked until after the first light frost. Rosehip tea is commonly used in the treatment of colds and influenza primarily because of it's high vitamin C content. It is said to contain four times as much vitamin C as black current juice and twenty times as much as oranges. The shells of the hips can be crushed and made into a sweet and pleasant tasting tea, or as with elderberries they can be made into a syrup or added to jams and jellies. The tea is excellent if you're feeling run down and taken cold it's particularly effective at quenching thirst in fevers. So with the nights drawing in and the colder weather on its way, now is the time to start wrapping up and think about taking Rosehip tea or Elderberry syrup to help ward off winter coughs and colds.