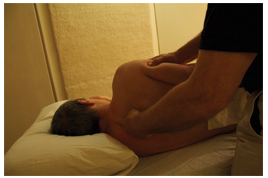 If you suffer from persistent, recurring or continuing intermittent pain, it may well be caused by active trigger points. These can be switched off by Trigger Point Therapy giving instant relief. Sometimes these seemingly intractable aches and pains may have been endured for years. Aches and Pains are not an inevitable part of getting older.

Trigger points are the key to much unexplained and misdiagnosed pain because many of them refer the pain to another location and mimic other symptoms. The pain in your neck may be caused by a trigger point in your shoulder, the pain between your eyes from one in your neck.

What conditions are treated?

Aches and pains are treated that are caused by trigger points. Trigger points are frequently misdiagnosed, so unless you have a convincing diagnosis and effective treatment for your pain, it is worthwhile to be checked for trigger points. Common misdiagnoses include: frozen shoulder, migraine, carpal tunnel, slipped discs, tooth ache.

What is the evidence for Trigger Points?

Trigger Points and their referral patterns were mapped by Janet Travell MD and David Simons MD over 40 years of research fully published in 1999.  Janet Travell was the White House doctor for JFK.

How do Trigger points cause pain?

A  trigger point is a contraction in a small part of a muscle. Blood flow essentially stops in the immediate area. The resulting oxygen starvation and accumulation of waste products of metabolism irritate the trigger point which then responds by sending out pain signals until the brain institutes a policy of rest for the muscle. You stop using the muscle which then begins to shorten and tighten up.

Muscles that have been shortened frequently squeeze nearby nerves thus leading to many misdiagnoses. Two examples are piriformis syndrome when trigger points in the piriforrmis muscle in the buttock compress the sciatic nerve which sends shooting pains down the leg and is then misdiagnosed as a slipped disc or an impingement in the lumbar vertebrae, and Carpal Tunnel Syndrome symptoms which can be caused by trigger points in the extensor muscles in the forearm.

What should I expect in the treatment?

I will listen to your description of where and how your pain hurts, and will then search the likely muscles for trigger points. When a trigger point is found it will be lightly squeezed until it releases. Then the muscle will be soothed, warmed and stretched.

No. Applying a lighter pressure for longer is more effective and long lasting.

How many treatments will I need?

The first treatment will determine if trigger points are playing a major part in your pain. If they are, one or two further treatments are usually enough to switch off the active trigger points and to show you where they are and how to switch them off yourself if they should return.
We will also give you advice on stretches and posture to lessen the chances of return